Monica Raymund returns with Hightown Season 2 on Sunday and while her character Jackie Quiñonez is in an infinitely better position than last season, it’s too early to tell if she can stay on the straight and narrow. 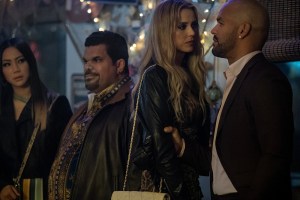 “At the top of Season 2, she’s got some days of sobriety under her belt and she’s working for the police department. She’s finally starting things off on the right foot,” Raymund tells Deadline at the Starz drama’s premiere on Saturday. “She has a new partner name Leslie Babcock [Tonya Glanz] and they’re the only two women on the police task force—two girls in a room full of men. So they get very close.”

On the dating front, Jackie is not necessarily on the prowl as we saw her in Season 1 but she’s certainly open to meeting new people.

“Yeah, she’s going to be mixing a little work with pleasure,” she says with a cheeky grin. “What I can say is that lines are going to get crossed and they’ll get pretty blurry. It’s going to get really hot!”

The heat really will also be high with the addition of Luis Guzman to the cast who stars as Jorge Cuevas, cousin of drug kingpin Frankie Cuevas (Amaury Nolasco), both of who are now out of prison and looking to take the business to the next level.

“He and Frankie are taking over and things are going to get real hairy, nasty, and dark,” she teases. “Guns blazing! I’ll interact more with Frankie this season, we’ll be going head to head. You can expect some friction on that front.”

Adds Nolasco of Guzman, “I couldn’t believe they were able to secure Luis to play my cousin this season. I grew up watching him. And, of course, he’s Pachanga in Carlitos Way! From the first moment we were on set, it was just two Puerto Ricans working in North Carolina having an amazing time.”

As Latinos do, Frankie welcomes Jorge into the home he shares with his fiancee Renee (Riley Voelkel) and their young son Frankie Jr. (Rumi C. Jean-Louis). When Renee asks Frankie how long he will be staying, she realizes he is welcome to stay indefinitely, much to her chagrin. The new living arrangement will wreak havoc on Frankie and Renee’s already fragile relationship.

“What it comes to Latinos, family comes first,” Nolasco says. “But of course, it’s inconveniencing the mother of his kid. So Frankie is very much in the middle, like a slice of ham in a sandwich. There’s a lot of push and pull and I’m like, ‘Hey guys, can’t we all just get along?’ And Jorge begins to plant these seeds of doubt and it will all come down to trust. Who should Frankie trust?”

Adds Voelkel, “Renee and Jorge are not each other’s biggest fans. She’s finally in this place where she’s made her decision, she’s chosen Frankie and she’s finally starting to move up and tackle more responsibilities when Jorge comes in and tries to take over. She doesn’t like that. And Jorge is always trying to sew distrust between Renee and Frankie which is not good for them. He just brings this whole new level of chaos and violence to the situation.”

Part of that chaos is Jorge’s new girlfriend Daisy (Jona Xiao)—the Bonnie to his Clyde.

“Daisy works at the strip club run by Frankie and Renee where she meets Jorge and they begin a relationship,” reveals Xiao. “And we stir up a lot of trouble! It was crazy shooting during Covid-era because we have some intimate scenes together but we couldn’t sit in the same car together because of restrictions. And as far as Daisy and Jackie are concerned, what I can tease is that they’ll face off a little bit.”

She adds, “One thing I’d like to add since it’s very easy to hypersexualize Asian women— with a character like Daisy who is a stripper—I think it’s easy to go that route. But what I love about the writing of her story is that she’s so layered and you see a real three-dimensional woman that is powerful and smart. We need to see more of these types of characters on TV.”