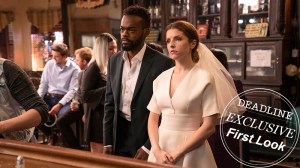 And that moment requires the show to welcome back one of Darby’s least favorite exes: Magnus Lund (Nick Thune). In an exclusive clip from the premiere below, Marcus and Darby interact at her wedding to Magnus.

The 10-episode season premieres on October 28.

Kendrick passes the baton to Harper, both of whom serve as executive producers of the romantic comedy anthology, in our interview below.

DEADLINE: Fans who thought they were done with Magnus better get ready because he’s back! Tell me about how Season 1 ends and Season 2 picks up.

ANNA KENDRICK: I know! We’re re-traumatizing the whole audience. I’m sorry about that.

For Season 2, we knew we wanted the stories to be connected somehow and we weren’t sure how we were going to accomplish that. I think making it this tenuous connection so Darby could come in and out of the season as needed was perfect. And so, in order to accomplish that, they found the easiest thing to do was to go back a little bit in time and meet Marcus at this tipping point in his life. It’s a really smart way to honor the idea of starting over at the beginning of somebody’s love life story without having to make it somebody who’s like in college, by focusing instead on someone whose love story is starting over.

DEADLINE: Will, when we first meet Marcus, we see how the many decisions he makes from moment to moment affect his life. What can you tease about what’s ahead?

WILLIAM JACKSON HARPER: Marcus is a guy who made a lot of strong decisions early to be where he is in his life at that age. I can’t quite identify with exactly that. There are definitely some decisions I’ve made in my 20s that are a little more permanent but the nature of some of the decisions he made, the stability that he found early on, is very adult and very committed. He’s a person who is still growing and changing and still learning stuff about himself. And it doesn’t stop because you’re thirty-something, that’s sort of where he is. Where he thinks he’s got it all on lock and everything figured out but he really, really doesn’t. That’s a recurring theme throughout the season.

DEADLINE: And it seems just as he’s got it all figured out the pandemic hits just as it did for all of us. How does that change the game for him, Will?

HARPER: The pandemic affected everybody and I feel like I got five years older, myself. Me, personally, when I go outside and people are talking too loud I’m like, “Oh hush! It’s not that funny.” That’s me now. I’m wearing this cardigan all the time, even when it’s hot. I also feel like for a lot of people this past year and a half has given us a lot of time to be with ourselves and many of us are figuring out what we’re all about and what’s important to us. It’s not even that you’re always thinking about it but at some point, it just becomes clear. That’s something that plays pretty heavily into this season.

DEADLINE: Anna, what’s it been like for you to see Will take the lead and enjoy the show as a viewer?

KENDRICK: Now that I’m not the lead of the show, I feel like I’m finally allowed to say, “I love this f**king show so much. It’s so good! I watched Will’s episodes and I’m like, “Damn, this is just so good.”

DEADLINE: Will, what’s it been like for you to take over as the lead of a romantic comedy?

HARPER: I watched the first season because I’m not really a rom-com guy but it just dives into so much other stuff. It was really like what it’s like to be twentysomething in New York and dealing with life in general. It’s like a bunch of people in a tiny apartment are all on top of each other and the doors to your room are all see-through. It feels so real.

DEADLINE: There are a lot of ideas for a Season 3 by the end. Are you guys looking to do more?

HARPER: I don’t know! We have no idea.

KENDRICK: We really have no idea. It’s funny because we’ve written ourselves into a corner where if there’s ever more interactions between Darby and Marcus it’ll have to be fully in the future which is always dicey. Frankly, in Love Life Season 1, we only went a couple of months into the future and then Covid hit. If we had written a year or more into the future, it wouldn’t have made sense. There’s clearly a danger with writing yourself into the future. I love the characters so much. I remember when we did the first Zoom table read and it was my first time seeing Jessica and Will together and their chemistry was explosive. I was so jealous! I was shooting a movie while they shot the season so I missed out.

There are a lot of interesting characters from this season that could work great to expand on. It’s like a Marvel Universe for adult dramedy.

HARPER: I would love to see more from maybe a character that we only saw in an episode or two get a big-a** arc so we can really dive in. We’re really lucky because everyone is so good and so fun to watch. Yeah, I’d love to go down the rabbit hole with someone new.