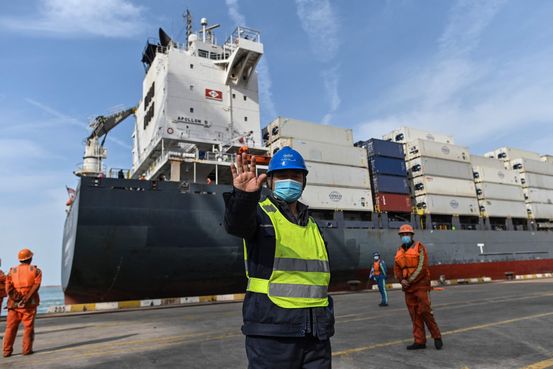 Singapore and Fujairah in the United Arab Emirates are preventing ships from changing crews that traveled to India while some Chinese ports, including the major container gateway of Ningbo-Zhoushan, are entirely barring ships that have traveled to India or Bangladesh over the past three months from calling at cargo terminals.

“It’s a contractual challenge and a well-being mental challenge,” said René Kofod-Olsen, chief executive officer of V.Group, a London-based ship management company that oversees assignments for more than 40,000 seafarers around the world.

“Our Indian colleagues are going through a really tough time,” he said.

India is one of the world’s biggest seafaring nations, with thousands of sailors routinely on the move to staff ships across the globe.

Replacing crews is a complicated operation that involves flying roughly 150,000 sailors industrywide around the world each month to connect with ships at far-flung ports. The widespread travel restrictions countries imposed early in the pandemic to rein back the spread of the coronavirus created a global crisis in crewing, leaving tens of thousands of sailors stranded because replacing workers was nearly impossible.

At the height of the global pandemic last year, some 400,000 crew members were overdue to disembark. Crew managers estimate around 200,000 of the world’s 1.6 million seafarers are still working beyond their contracts, and ship operators are bracing for the workforce to be stretched thinner with India now considered off limits by several countries.

Top news and in-depth analysis on the world of logistics, from supply chain to transport and technology.

Before the India restrictions, some 7% of sailors at V.Group were working beyond their contracts, which is a maximum of 11 months, according to the Maritime Labor Convention. But the number has now risen to around 10%

About a quarter of the world’s seafarers are from the Philippines. India, China, Indonesia and Ukraine are the other major seafaring nations, providing crews to some 60,000 ocean-going vessels.

“My brother in Mumbai is down with the virus,” said Abhinav Khatri, an Indian mechanic at a European-operated bulk carrier in the China Sea. “I’m two months overdue. I want to go home to take care of my family. But being at sea keeps me out of harm’s way and I can still send them money. It’s a terrible situation to be in.”

Ship operators are now scrambling to find sailors. Vaccinated Chinese sailors are in high demand, but they are in short supply because most are staffing China-flagged vessels.

A/S, the world’s largest container operator by capacity. “We were almost out of the woods with the crewing issue but are starting to see those restrictions again and fear it will get worse.”

Mr. Skou said Maersk is trying to get its crews vaccinated. “I don’t see the situation deteriorating at the levels of last year, but we are still running into a lot of problems,” he said.

The stresses of long stretches at sea are weighing on seafarers stuck aboard ships. Executives from 10 crewing agencies said at least nine sailors suffering from severe mental strain jumped overboard over the past 10 months, while dozens have been evacuated by helicopters with serious medical emergencies.

The International Maritime Organization, the United Nations body that regulates global shipping, said Tuesday that governments should prioritize crew vaccinations and recognize seafarers as essential workers for global supply chains to exempt them from travel barriers.

Kitack Lim, the IMO secretary-general, said 58 of the body’s 174 member states have designated seafarers as priority workers for vaccines.

India’s surge in Covid-19 cases has battered the country’s economy but cargo ships are still calling at Indian ports. Operations there are being hampered, however, because of the growing number of dock workers falling ill.

“At the moment we see a tighter situation in Mundra, regarding port, terminal and truck capacities due to workers being affected by Covid 19, which is also resulting in longer waiting times to get a berth,” said Tim Seifert, a spokesman for German container line

Write to Costas Paris at costas.paris@wsj.com

Should You Go Back to the Office?