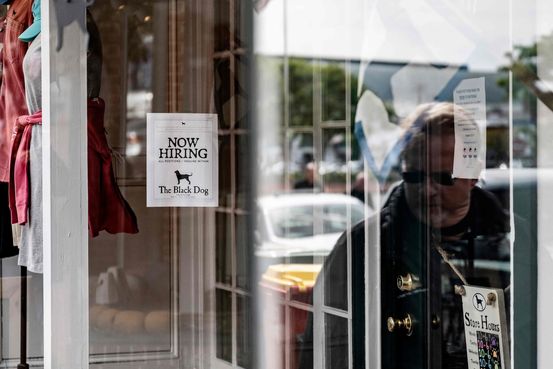 Jobless claims likely held near pandemic lows last week, a sign hiring is poised to strengthen as soon as more workers return to the labor market.

Economists expect Americans filed 500,000 claims for unemployment benefits last week, up slightly from a pandemic low of 498,000 a week earlier. Claims have come down from a recent January peak of about 900,000, though they remain more than twice as high as levels seen before the pandemic struck last spring.

“Employers are really clinging to their talent,” said Jay Denton, chief analyst for ThinkWhy, a labor-analytics firm. “There’s a lot of demand there. We will start to see more hiring.”

Higher vaccination rates, fiscal stimulus and easing business restrictions are converging to support stronger spending across the U.S. But job growth isn’t keeping pace. U.S. employers added a modest 266,000 jobs in April, far short of the one million that economists had forecast and the weakest monthly gain since January.

Those constraints could ease in September as the supplemental jobless benefits end and more schools reopen, said

The rate at which workers quit their jobs—a proxy for confidence in the labor market—held steady at 2.4% in March, matching a record high for data tracing back to 2000. “That signifies that it’s like, ‘See you later, I’m going to go get the next-best-paid job,’ ” Mr. Knightley said. “That sort of movement normally translates into companies thinking, ‘Actually, I need to retain staff. I’ve got to start paying more.’ ”

Wages for workers rose in April as some employers appeared to lift pay to attract or retain employees. Average hourly earnings for private-sector employees rose by 21 cents to $30.17 last month. The gain is notable because strong hiring in the lower-wage hospitality sector—which occurred in April—would typically put downward pressure on average earnings.

Many workers are still drawing on jobless benefits more than a year after the pandemic hit. A total of 16.2 million people were receiving benefits in the week ended April 17 through one of several programs, including regular state aid and federal emergency programs put in place in response to the pandemic. Total claims are down nearly four million from the first week of March, though it was still nearly eight times the number of people collecting benefits before the pandemic’s onset.

A number of Republican-led states are opting to end those enhanced federal benefits early, saying the extra $300-a-week supplement is providing an incentive for some people to avoid work at a time when employers are struggling to find labor. Those policy changes aren’t yet reflected in the jobless-benefits figures.

President Biden on Monday defended the enhanced benefits and said his administration would make clear that people can’t turn down suitable jobs and keep collecting benefits, except in specific circumstances. His administration has said other factors are keeping workers on the sidelines, such as fear of getting sick during the pandemic and a lack of full-time child care.

Police Arrest Tesla Driver for Operating Car From Back Seat