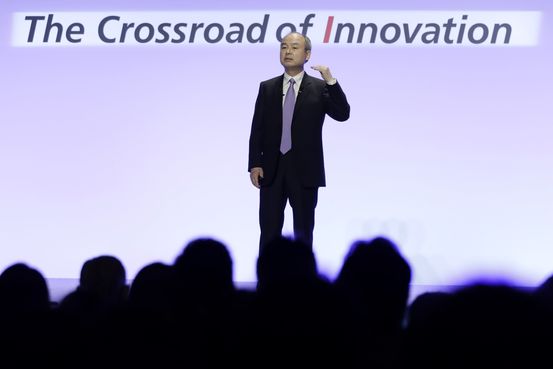 smashed profit records in its home country, riding a series of blockbuster initial public offerings to an annual net income of 4.99 trillion yen, equivalent to $45.9 billion—the highest ever for any Japanese company.

The results, which include a record profit of ¥1.93 trillion for the quarter that ended in March, cap a wild year in which the Japanese technology investor rode roller-coaster stock markets from the lows at the beginning of the pandemic to recent highs.

The numbers were driven largely by an annual investment gain of ¥6.29 trillion at its $100 billion Vision Fund and its successor, whose portfolio companies have been listing in droves as the stock market soars. The Vision Fund’s biggest win was a ¥2.6 trillion investment gain from its nearly 40% stake in South Korean e-commerce company

which listed in March. SoftBank also logged ¥945.9 billion in gains from the sale last year of a controlling stake in U.S. telecom company Sprint Corp. as well as a rise in the value of its remaining holdings.

SoftBank said it has tripled the size of the capital it has pledged to its second Vision Fund, to $30 billion, amid the strong returns.

SoftBank shares ended at ¥9,180 on Wednesday, nearly double their price a year ago.

decision a few years ago to shift the conglomerate’s primary business to tech investment from telecommunications—a decision viewed with skepticism for years, especially when missteps at the Vision Fund cost the company billions in 2019 and early 2020.

SoftBank’s fiscal-year profit is roughly double that of

record—previously the highest for any Japanese company, according to data from S&P Global Market Intelligence. It puts SoftBank’s earnings in a league with tech stars like Google parent

, whose annual profit records are in the $40 billion range, the data shows.

What do you think the future holds for SoftBank? Join the conversation below.

The results had Mr. Son waxing nostalgic about the days in 1981 when he launched SoftBank in a small town in southern Japan, and dreamed of building a company that would earn trillions of yen in revenue and profit. “We can finally count our revenue and profit” in those terms, he said at a press conference in Tokyo, standing in front of a black-and-white photo of an intersection in the town. “This photo expresses SoftBank’s 40-year history.”

SoftBank has spent much of the past year selling assets, stocking up on cash and, more recently, racking up investment gains as global public markets soared.

In one of its first such moves early last year, the company unveiled a plan to buy back a whopping ¥2.5 trillion of its own shares—at the time equivalent to 45% of its stock—in a little over a year. That repurchase is now virtually complete, SoftBank said Wednesday. Investors have credited the step with helping spur the big rise in SoftBank’s shares, which are now trading slightly under all-time highs, and many are eager for the buybacks to continue.

After nearly a year and a half of slower deal-making, SoftBank has recently picked up the pace of investments—largely through its second Vision Fund, which the company is funding on its own after failing to attract outside investors.

What You Need to Know About Investing

Write to Phred Dvorak at phred.dvorak@wsj.com

Colorado Drillers to Combine, as Consolidation Continues in Oil Patch