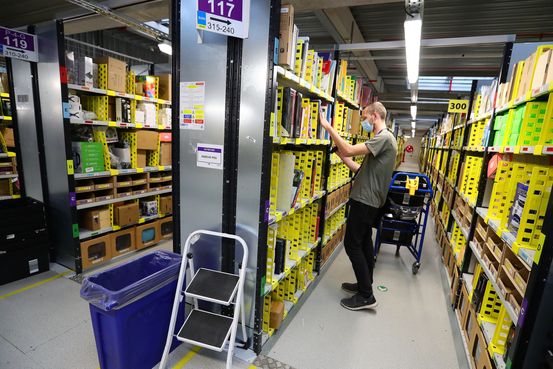 The decision is a test for Amazon’s tax dealings in Europe, but the stakes are potentially higher for

who is leading the EU’s campaign to curb alleged excesses by some of the world’s largest tech companies, including Amazon, Apple Inc. and

Ms. Vestager, an executive vice president of the European Commission, the bloc’s executive arm, has already been rebuked once by the same court in a similar case. The General Court overturned her 2016 order that Ireland must recoup some 13 billion euros, equivalent to $15.8 billion, in taxes from Apple. Ms. Vestager has since appealed that case to the Court of Justice, the EU’s top court.

Ms. Vestager’s tax cases were among her first big salvos against tech companies in her role running EU competition enforcement. She later fined Google three times for alleged abuses of dominance, which the company is appealing. In recent months, she has also filed formal antitrust charges against Amazon and Apple for their treatment of rivals.

Both the Amazon and Apple tax cases are based on a facet of EU law aimed at creating a level playing field for companies across the bloc by forbidding governments from granting companies some types of state aid.

Wednesday’s decision could have a significant impact on Ms. Vestager’s efforts to use those rules to go after what she contends were sweetheart tax deals granted to multinational companies based in a handful of EU countries, including Luxembourg and Ireland. In addition to the Amazon and Apple tax cases, Ms. Vestager ordered tax repayments from companies including

On Wednesday, the General Court is also expected to decide the appeal from

a French state-owned energy company, of the commission’s decision to order Luxembourg to recoup roughly €120 million in unpaid taxes. Both of Wednesday’s decisions can be appealed to the Court of Justice.

So far Ms. Vestager’s record in tax cases has been mixed. The General Court sided with Apple and Starbucks in their appeals but with Ms. Vestager in the case against Fiat.

In the Apple case, the General Court annulled the tax decision, saying the commission had failed to meet the legal standards in showing that Apple was illegally given special treatment.

The Amazon case is coming to a head as international talks aimed, at least in part, at shifting the taxation of big tech companies are making progress. Those talks, shepherded by the Organization for Economic Cooperation and Development, had been bogged down, leading several countries to impose their own unilateral taxes on big digital companies, including Amazon, over objections from technology trade groups.

Wednesday’s decision concerns a structure Amazon used in Europe as part of a series of transactions known internally inside the company as Project Goldcrest, named for Luxembourg’s national bird.

In its 2017 decision against Amazon, the commission argued that the company had improperly inflated the royalty to eat up the operating company’s profit. The commission said the way Amazon calculated its tax base in Luxembourg was based on a 2003 tax deal, which was prolonged in 2011. The commission ordered Luxembourg to recoup from Amazon €250 million in alleged unpaid taxes over an eight-year period.

Amazon, which had since changed its tax structure, said at the time that it “did not receive any special treatment from Luxembourg and that we paid tax in full accordance with both Luxembourg and international tax law.”

In its appeal, argued in 2020 before the General Court, Amazon said the commission’s decision was riddled with legal and factual errors, contending that its payments were in keeping with international tax principles and that Luxembourg’s tax rulings didn’t confer an advantage on the e-commerce company. Luxembourg also appealed.

The U.S. Internal Revenue Service, for its part, had also sought as much as $1.5 billion in additional taxes from Amazon over the same set of transactions, but a U.S. tax court sided with Amazon in 2017, ruling that the IRS had made arbitrary determinations and abused its discretion in several instances. A U.S. appeals court later upheld that decision.

Write to Sam Schechner at sam.schechner@wsj.com

Biden Administration to Start Doling Out $350 Billion in Aid to...